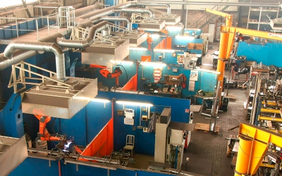 HAIGER/GELSENKIRCHEN – Quality and durability – these are the characteristics of the strength training, fitness, medical and performance equipment from gym80 International GmbH. For more than 20 years, the top manufacturer has relied on the welding robot systems of Carl Cloos Schweißtechnik GmbH. Production takes place in the middle of the Ruhr Valley: in Gelsenkirchen! There, the traditional company now uses eight QIROX robot systems.

Because he could not find any suitable products on the market that could meet his requirements, Walter Herden from Gelsenkirchen began to build fitness equipment for his own use at the end of the 1970s. Through word of mouth, he quickly built up a large fan base and the demand increased. He then founded gym80 in 1980 to devote himself exclusively to designing and building strength equipment. In the following years, the company continuously expanded its product range and grew enormously. Today, gym80 supplies both smaller fitness studios and large fitness chains worldwide. There is also an increasing number of enquiries from the private sector. Under the MED80 label, gym80 also produces equipment for medical facilities such as hospitals and physiotherapy practices.

State-of-the-art technology meets traditional, craftsmanship
With excellent biomechanics, craftsman precision and a clear design, we have revolutionised training,” says Simal Yilmaz who now heads the company as CEO. "We develop and produce strength equipment with incomparable resilience from 4 mm thick steel combining state-of-the-art technology and traditional craftsmanship."
From the very beginning, gym80 has remained loyal to the Gelsenkirchen location for the company headquarters and production with a total of more than 100 employees. In addition to the eight QIROX welding robots from CLOOS, the production includes four laser robots, its own carpentry and upholstery shop as well as many stations where welding, grinding and painting are carried out by hand. "Our manufacturing process is characterised by a production depth of around 95 per cent," emphasises production employee Jörg Noffke. "This allows us to implement individual customer requests and at the same time ensure the best product quality."

Eight compact systems for different components
In 2003, gym80 started automated welding production with two robot systems by CLOOS. Today, various components are welded with a total of eight QIROX compact systems. All systems are equipped with a 2-station workpiece positioner with two opposite stations. In five systems, the stations have a horizontal swivelling axis with an L-shaped extension arm. A vertical rotary axis with a face plate for holding the workpiece is integrated in the extension arm. In the other three systems, the stations each have two vertically arranged face plates between which the workpiece is mounted. Thus the workpiece which is fixed on this faceplate is turned into the optimum processing position by a horizontal turning axis. The counter bearing stabilises even long workpieces during welding.

The station change in all systems is made by a horizontal rotation. Due to the two-station design, robot welding in one station and loading of the components in the other station is simultaneously possible.

The two latest compact systems are also equipped with the 7-axis QIROX QRC-350E welding robot which is mounted overhead. This enlarges the robot working space and simplifies welding of the sometimes large-volume and complex components.