On the road to success with independent mechanical engineering 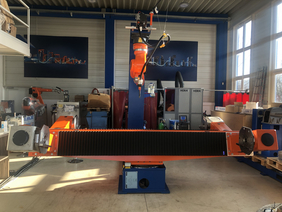 Until a few years ago, CLOOS Austria was primarily a sales and service base for CLOOS products. Since 2017, the Austrian subsidiary has established its own assembly division. A large part of the robot systems is now assembled directly at the Biedermannsdorf site.

CLOOS Austria was already founded in 1982 and is thus one of the oldest CLOOS subsidiaries. In the early years, CLOOS Austria operated from Vienna primarily as a central sales and service base for Eastern Europe and Russia. Since the founding of the Czech subsidiary CLOOS Prague in the 1990s, CLOOS Austria then focused more on the Austrian market again. In 2000, the company moved to its current location in Biedermannsdorf. Thomas Maeting has been Managing Director of CLOOS Austria since 2009 and is continuously expanding the activities on the Austrian market. In addition to Austria, the company supports customers in Albania, Bosnia-Herzegovina, Bulgaria, Croatia, Macedonia, Serbia and South Tyrol. The customers are active in sectors such as construction machinery, rail vehicles, the agricultural industry and many others.

While in the past the subsidiary was mainly responsible for sales, customer service and spare parts deliveries, Maeting has built up its own mechanical engineering department in recent years. For this purpose, CLOOS Austria buys robots and welding power sources as an integrator from CLOOS Haiger. Today, small and medium-sized robot systems are directly assembled in Biedermannsdorf. The commissioning of the systems is largely independent of CLOOS Haiger. "We can assemble large gantry systems with floor-mounted linear tracks up to a length of 15 meters and positioners up to 5 tons in Austria," Maeting states happily. "Only compact cells and more complex robot systems are still produced for us in Haiger." Used systems are also reconditioned directly by CLOOS Austria. The company has installed a new compact warehouse and a new hall crane to ensure the smooth assembly of the systems in Biedermannsdorf. "We want to be technically up to date," Maeting emphasises. "We have also hired two additional mechanics for the assembly and commissioning of our systems." In order to act even faster and more efficiently, he has built up his own supplier network in the steel construction sector. "Our customers benefit in particular from the shorter delivery times in Austria," explains Maeting. "In-house production creates trust in the market."